Early warning of harmful nuclear materials is critical for first responder safety. The Thermo Scientific™ RadEye™ GN+ Gamma Neutron Pager is a highly sensitive radiation detection device that warn of rising levels of gamma and neutron radiation and immediately classify the gamma source (NORM/non NORM). This small, lightweight unit provides clear visual and audio alarms to help emergency services personnel locate radioactive materials in a variety of situations. It is also an excellent tool for expanding the surveillance area of stationary monitoring systems or to verify alarms of such systems.

The Thermo Scientific RadEye GN+ Gamma Neutron Pager has a very high neutron sensitivity that exceeds the time-to-time requirements of ANSI 42.32 and IEC 62401. The RadEye GN+ pager incorporates a single highly sensitive scintillation detector equipped with a miniature photo-multiplier to detect very low radiation levels of both gamma and neutron radiation from any source.

The RadEye GN+ indicates whether the alarms are due to gamma or neutron by a different colored alarm LED, different tones and flashing the count rate/dose rate display readings with an inverted display background of the alarming channel or both channels as appropriate. The RadEye GN+ also has different audible alarms, discriminating between elevated background/NORM and any artificial isotope alarm. The gamma and neutron audible alarms are clearly different. This gives the RadEye GN+ audible and visual identification using NBR of the type of material detected. A bright orange LED for gamma alarms and a bright blue LED for neutron alarm is viewable from the front and above. When a dual gamma and neutron alarm is detected, both LEDs flash. Both readings on the display are flashed with a reversed background. 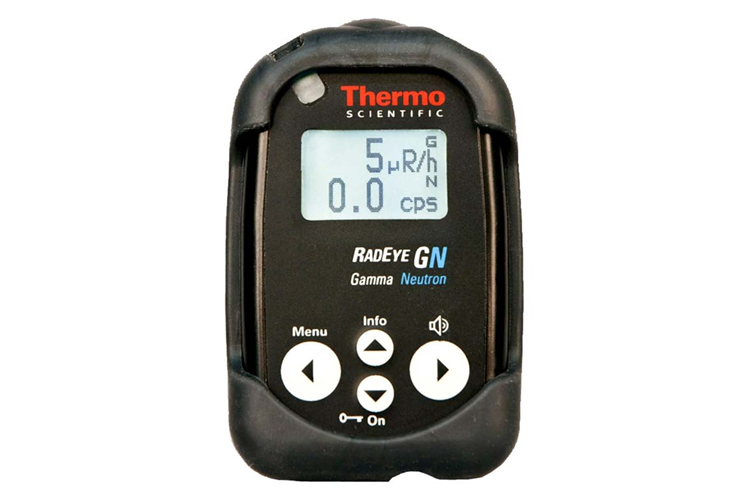 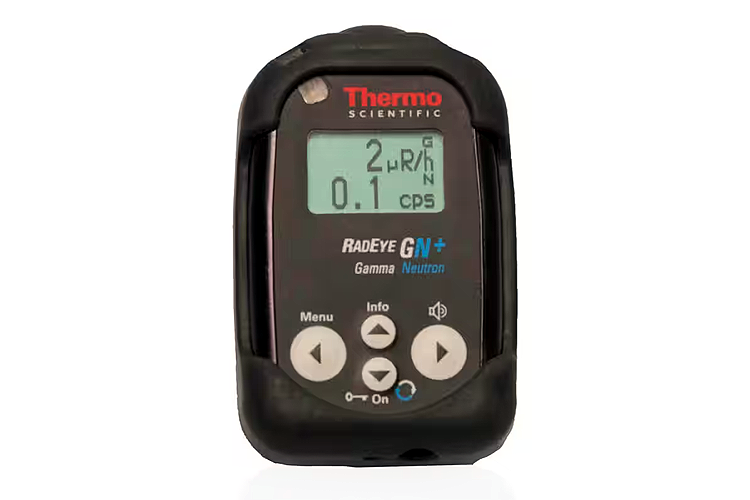